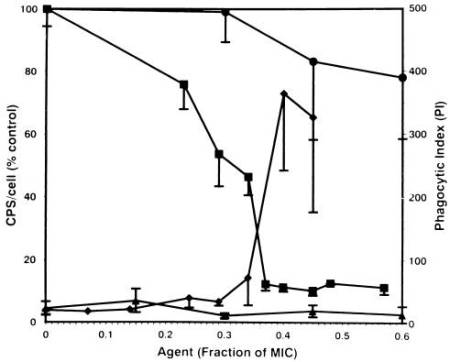 ◆ Effect of BTs on phagocytosis

▲ Effect of CHX on phagocytosis

The featured image on this post is from a key experiment we performed in the mid 1990s at Winthrop-University Hospital. It shows the uniqueness and potential of our antibacterial agents, the bismuth thiols (BTs). The bottom of the graph shows drug amounts in fractions of what it takes to inhibit bacterial growth (called the minimal inhibitory concentration or MIC). In other words, there is not enough drug present to inhibit the growth of these bacteria, and they are still growing. Nevertheless, something is happening to them, as the BT level increases. Slime (CPS) production gets reduced by 90% at less than half the BT concentration that inhibits bacterial growth (graph: line with black squares).

Slime functions to camouflage bacteria to protect them from host defenses and other noxious elements. But BTs stop slime, which renders bacteria naked and susceptible. When human white blood cells are thrown into the mix, they readily eat these naked, BT-treated bacteria (a.k.a., phagocytosis). The phagocytic index (# of bacteria ingested by 100 random white blood cells) for BTs is represented in the graph by the line with diamonds. As the amount of slime drops, the amount of phagocytosis jumps precipitously. Each white blood cell ingests several bacteria, which are killed and degraded. Without BT treatment, virtually no bacteria are taken up by white blood cells. Simply put, immune cells gobble up slime-forming bacteria in the presence of small amounts of BT.

The graph also shows the effects of chlorhexidine (CHX), a popular dental antiseptic. The line with black circles shows how little CHX affects slime production at these low concentrations. In turn, CHX has little or no effect on phagocytosis at these levels (graph: line with black triangles). Indeed, no other antimicrobial has the slime-inhibiting effects shown by the BTs, especially at sub-MIC concentrations. This anti-slime effect may one day work to boost our immune systems against harmful bacteria.

The BTs have so many interesting antimicrobial properties, but this is what makes them so special. Most pathogens evade our immune defenses by making slime. To think that tiny amounts of BTs can stop all slime production is mind boggling.

BTs should prove useful for a variety of diseases and purposes. Our focus at present is on the most pressing needs in medicine, such as wound and lung infections (e.g., Cystic Fibrosis). BTs will eventually find their way into other areas of  medicine, dentistry, agriculture and industry. It may also address the problem of antimicrobial resistance, since virtually all bacteria are susceptible.

For further information go to http://www.microbioncorp.com